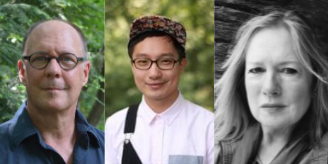 We are thrilled to launch our Fall 2022 reading series with this reading by three magnificent poets.

David Baker is a poet, educator, editor, and literary critic.  He was born in 1954 in Bangor, Maine, grew up in Jefferson City, Missouri, and since 1983 has lived in central Ohio.  He received his B.S.E. and M.A. degrees in English from the University of Central Missouri and his Ph.D. in English from the University of Utah, where he also served from 1980-83 as Editor and Poetry Editor of Quarterly West.  Since 1984 Baker has taught at Denison University, in Granville, Ohio, where he is currently a teaching Emeritus Professor of English.  Baker also serves frequently on the faculty of the MFA program for writers at Warren Wilson College and at writers’ workshops around the country.  After serving as Poetry Editor of The Kenyon Review for more than twenty-five years, he currently curates the annual “Nature’s Nature” feature for the magazine.

Chen Chen is the author of the forthcoming poetry collection, Your Emergency Contact Has Experienced an Emergency (BOA Editions, September 2022) and the forthcoming book of essays, In Cahoots with the Rabbit God (Noemi Press, 2023). His debut book of poems, When I Grow Up I Want to Be a List of Further Possibilities (BOA Editions, 2017), was longlisted for the National Book Award and won the Thom Gunn Award, among other honors. His work appears in many publications, including Poem-a-Day and three editions of The Best American Poetry (2015, 2019, & 2021). He has received two Pushcart Prizes and fellowships from Kundiman, the National Endowment for the Arts, and United States Artists. He teaches at Brandeis University.

Kathy Fagan is the author of Bad Hobby (Milkweed, September 13, 2022) and Sycamore Milkweed, 2017), a finalist for the Kingsley Tufts Award, as well as four previous collections, including The Charm, the National Poetry Series-winning The Raft, and Vassar Miller Prize-winner Moving & St. Rage. Fagan’s work has appeared in venues such as the New York Times Sunday Magazine, Poetry, The Nation, the New Republic, Best American Poetry, and the Academy of American Poets Poem-A-Day. She has received a National Endowment for the Arts Fellowship and an Ingram Merrill Foundation Fellowship, and served as the Frost Place poet in residence. Fagan is cofounder of the MFA program at The Ohio State University, where she teaches poetry, and coedits the Wheeler Poetry Prize Book Series for The Journal and The Ohio State University Press.

This event will take place in person and via Zoom. The Zoom link will be sent at the time of registration and again the morning of the event. Please write to [email protected] with any questions.