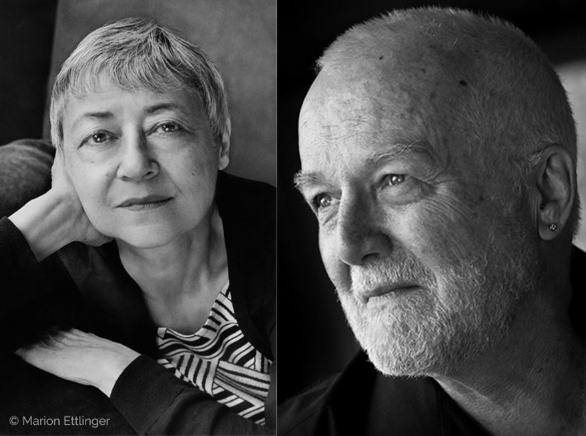 The Hudson Valley Writers Center is thrilled to welcome Russell Banks for the first time and to welcome Sigrid Nunez back to our reading series! Banks & Nunez will read from their most recent novels.

This reading is co-hosted by Book Ya Ya. Tickets are $10. Please click here to purchase your ticket on Book Ya Ya. After registering, check the promotions/spam folder of your email inbox for an invitation from Book Ya Ya to our event. After you accept the invitation, you’ll be directed to the Zoom link. Please email [email protected] with any questions.

If you cannot pay $10 for a ticket or are a current student or member of HVWC, you many register below for a free ticket. The Zoom link will be emailed after registration. (Please check spam / promotions folder for this email and email [email protected] with any questions.) Additional donations given at checkout are encouraged & greatly appreciated.

What Are You Going Through (Riverhead Books, 2020) is a national bestseller, a New York Times Critics’ Top Book of 2020, one of People Magazine’s Top 10 Books of 2020, a Best Book of 2020: O,The Oprah Magazine, Kirkus Reviews, Times Literary Supplement, The Guardian, and NPR

A woman describes a series of encounters she has with various people in the ordinary course of her life. Some, like the old friend she goes to visit at a cancer clinic, are people she knows well; others are total strangers. All share a need to talk about themselves. The narrator orchestrates this chorus of voices, sometimes paraphrasing others’ stories, other times allowing them to speak, in extended monologues, for themselves. What emerges is a portrait of the way we live now, in a world endlessly troubled by crises, and the dramatically changing nature of human relationships in our time. For the most part, the narrator assumes the role of a passive listener to her collective storytellers. Then one of them surprises her with an extraordinary request, and she is drawn into what will become an intense and transformative experience of her own.

Sigrid Nunez has published seven novels, including A Feather on the Breath of God, The Last of Her Kind, Salvation City, and, most recently,The Friend. She is also the author of Sempre Susan: A Memoir of Susan Sontag. The Friend, a New York Times bestseller, won the 2018 National Book Award and was a finalist for the 2019 Simpson/Joyce Carol Oates Prize. In France, it was longlisted for the 2019 Prix Femina and named a finalist for the 2019 Prix du Meilleure Livre. It has also been shortlisted for the 2020 International Dublin Literary Award. Nunez’s other honors and awards include a Whiting Writer’s Award, a Berlin Prize Fellowship, the Rosenthal Family Foundation Award, the Rome Prize in Literature, and a Guggenheim Fellowship. Among the journals to which she has contributed are The New York Times, The New York Times Book Review, The Wall Street Journal, The Paris Review, The New York Review of Books, Threepenny Review, Harper’s, McSweeney’s, Tin House, The Believer and newyorker.com. Her work has also appeared in several anthologies, including four Pushcart Prize volumes and four anthologies of Asian-American literature. One of her short stories was selected for The Best American Short Stories 2019. Her work has either been or is being translated into twenty-five languages. Nunez has taught at Columbia, Princeton, and the New School, and has been a visiting writer or writer in residence at Amherst, Smith, Baruch, Vassar, Syracuse, and the University of California, Irvine, among others. Currently teaching at Boston University, she has also been on the faculty of the Bread Loaf Writers’ Conference and of several other writers’ conferences across the country. She lives in New York City.

Forgone (March, 2021, Ecco) is a searing novel about memory, abandonment, and betrayal from the acclaimed and bestselling Russell Banks. At the center of Foregone is famed Canadian American leftist documentary filmmaker Leonard Fife, one of sixty thousand draft evaders and deserters who fled to Canada to avoid serving in Vietnam. Fife, now in his late seventies, is dying of cancer in Montreal and has agreed to a final interview in which he is determined to bare all his secrets at last, to demythologize his mythologized life. The interview is filmed by his acolyte and ex–star student, Malcolm MacLeod, in the presence of Fife’s wife and alongside Malcolm’s producer, cinematographer, and sound technician, all of whom have long admired Fife but who must now absorb the meaning of his astonishing, dark confession. Imaginatively structured around Fife’s secret memories and alternating between the experiences of the characters who are filming his confession, the novel challenges our assumptions and understanding about a significant lost chapter in American history and the nature of memory itself. Russell Banks gives us a daring and resonant work about the scope of one man’s mysterious life, revealed through the fragments of his recovered past.

Russell Banks grew up in a working-class world that has played a major role in shaping his writing. Through a dozen novels and short story collections that have won him Guggenheim and NEA grants and a St. Lawrence Prize for fiction, Banks has made a life’s work of charting the causes and effects of the terrible things “normal” men can and will do. He writes with an intensely focused empathy and a compassionate sense of humor that help to keep readers, if not his characters, afloat through the misadventures and outright tragedies in his books. A deep appreciation for his work has led the cities of Seattle and Rochester to each select his book The Sweet Hereafter as a “book in common” for their communities to read.

A prolific writer of fiction, Russell Banks’s titles include The Darling, The Sweet Hereafter, Cloudsplitter, Rule of the Bone, Affliction, Success Stories, Continental Drift, Searching for Survivors, Trailerpark, The Book of Jamaica, The New World, Hamilton Stark,  The Reserve, Lost Memory of Skin, and a collection of short stories titled A Permanent Member of the Family. His book, Dreaming Up America, is the American edition of a nonfiction book of essays which was previously published in France under the title Amerique Notre Histoire. He is also the author of Voyager: Travel Writings.  In May 2008, Harper Collins published Outer Banks (which includes three of his previously published novels: Family Life, Hamilton Stark, and The Relation of My Imprisonment). Banks has contributed poems, stories, and essays to The Boston Globe Magazine, Vanity Fair, The New York Times Book Review, Esquire, Harper’s and numerous others. His next novel is titled Foregone (Ecco/Harper Collins, March 2, 2021).

His novels, Affliction and The Sweet Hereafter, were adapted into feature films which received widespread critical acclaim: James Coburn won the Academy Award for Best Supporting Actor and Nick Nolte was nominated for an Academy Award for Best Actor for their roles in “Affliction;” “The Sweet Hereafter” won three awards, including the Grand Prix and the International Critics Award at the 1997 Cannes Film Festival. In 2019 Banks wrote the libretto for an opera titled Harmony with music composed by Robert Carl which will premiere in summer 2021 at the Seagle Music Colony in Schroon Lake NY.

Included among the numerous honors and awards Russell Banks has received are the Ingram Merrill Award, the John Dos Passos Award, the Literature Award from the American Academy of Arts and Letters, and the Laure Bataillon Prize for best work of fiction translated into French, for the French edition of The Darling. Continental Drift and Cloudsplitter were Pulitzer Prize finalists; Affliction, Cloudsplitter and Lost Memory of Skin were PEN/Faulkner Finalists. Lost Memory of Skinwas a Finalist for the inaugural Andrew Carnegie Medal for Excellence in Fiction.Banks was New York State Author (2004–2008) and is the founder and President of Cities of Refuge North America. He has been awarded honorary doctorates from seven colleges and universities. He is the winner of the 2011 Common Wealth Award for Literature. In 2011, the French Minister of Culture awarded Mr. Banks the rank of Officier des Arts et Lettres. In 2014 he was  inducted into the New York State Writers Hall of Fame.