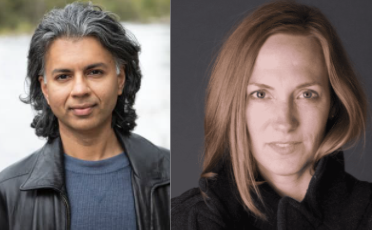 Join us to hear an astonishing evening of fiction from two Westchester novelists as Bethany Ball returns to read at the Hudson Valley Writers Center with her new novel, The Pessimists (Grove 2021). Debut novelist, Jai Chakrabarti, will read from A Play for the End of the World (Knopf, 2021).

About Bethany Ball’s The Pessimists

Welcome to small town Connecticut, a place whose inhabitants seem to have it all — the status, the homes, the money, and the ennui. There’s Tripp and Virginia, beloved hosts whom the community idolizes, whose basement hides among other things a secret stash of guns and a drastic plan to survive the end times. There’s Gunter and Rachel, recent transplants who left New York City to raise their children, only to feel both imprisoned by the banality of suburbia. And Richard and Margot, community veterans whose extramarital affairs and battles with mental health are disguised by their enviably polished veneers and perfect children. At the center of it all is the Petra School, the most coveted of all the private schools in the state, a supposed utopia of mindfulness and creativity, with a history as murky and suspect as our character’s inner worlds.

With deep wit and delicious incisiveness, in The Pessimists, Bethany Ball peels back the veneer of upper class white suburbia to expose the destructive consequences of unchecked privilege and moral apathy in a world that is rapidly evolving without them. This is a superbly drawn portrait of a community, and its couples, torn apart by unmet desires, duplicity, hypocrisy, and dangerous levels of discontent.

Praise for The Pessimists:

The Pessimists is honest and hilarious— treating suburban angst, marriage, and private school life both seriously and with the humor they’re due. Ball writes with the sharpened pen of writers like Meg Wolitzer and Taffy Brodesser-Akner, but with a dangerous edge and a pathos all her own.” —Rebecca Makkai, Pulitzer Finalist for THE GREAT BELIEVERS

“I read The Pessimists in one sitting, ignoring my phone and my family until I’d reached the final page. Bethany Ball is a writer of singular power, urgency, and humor, a master chronicler of middle class ennui in the vein of Tom Perrotta and Meg Wolitzer. I loved this book.” —Joanna Rakoff, Author of My Salinger Year

“The Pessimists is a sweet-and-sour gimlet of a novel. It goes down easy, with a satirical edge and a knock-out punch. With raw honesty and sympathy, Bethany Ball exposes the foibles, follies, and discomforts of her comfortable suburban characters, shedding light into the dark corners of their inner lives. I’ve never seen a writer capture the ambush of middle age so well, with such blunt truth and knife-sharp humor. She details the troubles that come for people whose habitual striving has lost purpose—the disappointments small and large, the widening perforations of marriage and family, the disillusionment and indecision, the simmering discontentment—but also the sparks of joy, the salve of love, and the surprising shoots of growth. She is so good, and The Pessimists is terrific.” —Lauren Acampora, Author of The Paper Wasp

“As a portrait of a wealthy suburban community and the secret weirdos who inhabit it, this novel was perfection. From the private school where the kids aren’t actually learning anything to the dad stockpiling arms for the end of the world, I was with this story. There’s plenty of satire here, for sure, but I also genuinely rooted for these people’s private worries and hopes, the humanity that was still there under so much nonsense.”—Mary Beth Keane, author of Ask Again, Yes

“There’s nothing more exciting as a bookseller (or a reader) than discovering a new writer who creates memorable characters in a setting we don’t see every day. Funny, sexy, and smart.”―Judy Blume, New York Times  “Summer Reading Recommendations, From 6 Novelists Who Own Bookstores”

ABOUT A PLAY FOR THE END OF THE WORLD

A dazzling debut novel—set in early 1970’s New York and rural India—the story of a turbulent, unlikely romance, a harrowing account of the lasting horrors of the Second World War, and a searing examination of one man’s search for forgiveness and acceptance.

“Looks deeply at the echoes and overlaps among art, resistance, love, and history … an impressive debut.” —Meg Wolitzer, best-selling author of The Female Persuasion

New York City, 1972. Jaryk Smith, a survivor of the Warsaw Ghetto, and Lucy Gardner, a southerner, newly arrived in the city, are in the first bloom of love when they receive word that Jaryk’s oldest friend has died under mysterious circumstances in a rural village in eastern India. Traveling there alone to collect his friend’s ashes, Jaryk soon finds himself enmeshed in the chaos of local politics and efforts to stage a play in protest against the government—the same play that he performed as a child in Warsaw as an act of resistance against the Nazis. Torn between the survivor’s guilt he has carried for decades and his feelings for Lucy (who, unbeknownst to him, is pregnant with his child), Jaryk must decide how to honor both the past and the present, and how to accept a happiness he is not sure he deserves. An unforgettable love story, a provocative exploration of the role of art in times of political upheaval, and a deeply moving reminder of the power of the past to shape the present, A Play for the End of the World is a remarkable debut from an exciting new voice in fiction.

From Nov 2, 2021’s New York Times: “The haunted man at the heart of Jai Chakrabarti’s A PLAY FOR THE END OF THE WORLD (Knopf, 304 pp., $27) is one of the few survivors of a generation, a Polish immigrant in New York who can’t forget the makeshift family that was transported to Treblinka without him. Jaryk and his older friend, Misha, first met in a Jewish orphanage in Warsaw and now they’re the only two of its former residents able to testify to the heroism of its director, a historical figure named Janusz Korczak, who spurned an opportunity to save himself and accompanied his young charges to the gas chamber. Chakrabarti writes that his title refers to a play by the Bengali poet Rabindranath Tagore, “about a dying child living through his imagination,” that Korczak staged at the orphanage in 1942 — an attempt to comfort his beloved boys and girls, to “prepare them for what was to come.” Chakrabarti uses this historical footnote to envision a whole new fictional production, organized 30 years later by an Indian academic trying to save an endangered village whose inhabitants have fled the violent birth of the new nation of Bangladesh. Invited to participate, Misha eagerly accepts. But Jaryk, who has finally met a woman he might trust with a glimpse of his past, lets him fly to Calcutta alone. Misha’s sudden death sends Jaryk on a journey halfway across the globe that will plunge him into an increasingly complicated political drama. But it’s the plight of Lucy, the newly pregnant American he leaves behind, that gives Jaryk’s moral dilemma added intimacy: Will honoring past loyalties sabotage those of the present and future? As the novel moves between Lucy in America and Jaryk in India, with interludes that return to the Warsaw ghetto, we come to understand Jaryk’s guilt-stricken “need to burrow into oblivion” — and to hope that another need will somehow uproot it.”

BETHANY BALL lives in Westchester. Her recent book, What to Do about the Solomons was released in April 2017 from Grove Atlantic. Her forthcoming novel, The Pessimists, will be published by Grove in October. It was named one of the most anticipated books of 2021 by Lit Hub.

JAI CHAKRABARTI’s short fiction has appeared in numerous journals and has been anthologized in The O. Henry Prize Stories, The Best American Short Stories, and awarded a Pushcart Prize. Chakrabarti was an Emerging Writer Fellow with A Public Space and received his MFA from Brooklyn College. He was born in Kolkata, India, and now lives in Westchester, New York, with his family. A Play for the End of the World is his first novel.

Preorder A Play for the End of the World