An Evening with Ryan Black, Maya Phillips, and Jason Schneiderman 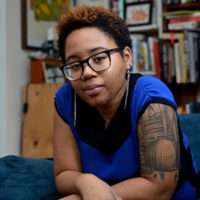 HVWC welcomes three amazing poets—Ryan Black, Maya Phillips, and Jason Schneiderman—as they read from their most recent award-winning collections. This reading is free and open to the public via Zoom. Donations are encouraged.

There is a promo code for Maya’s collection Erou if you purchase it directly from the press here. It’s  HVWC2020 and can be used September 24-26.

Hold Me Tight by Jason Schneiderman

Ryan Black is the author of The Tenant of Fire (University of Pittsburgh Press), winner of the 2018 Agnes Lynch Starrett Prize, and Death of a Nativist, selected by Linda Gregerson for the Poetry Society of America’s 2016 Chapbook Fellowship. He has published previously or has work forthcoming in The Best American Poetry, Blackbird, Ploughshares, The Southern Review, Virginia Quarterly, and elsewhere. He’s received fellowships and scholarships from the Adirondack Center for Writing, The Millay Colony for the Arts, PLAYA, the Sewanee Writers’ Conference, the T. S. Eliot House, and the Queens Council on the Arts. He is an Assistant Professor of English at Queens College/CUNY, and lives in Jackson Heights, NY.

Maya Phillips was born and raised in New York. Maya received her BFA in writing, literature, and publishing with a concentration in poetry from Emerson College and her MFA in poetry from Warren Wilson’s MFA Program for Writers. Her poetry has appeared in American Literary Review, At Length, BOAAT, Ghost Proposal, Hayden’s Ferry Review, The Rumpus, Vinyl, The Gettysburg Review, The Missouri Review, and The New York Times Magazine, among others. Her arts & entertainment journalism has appeared in The New York Times, The New Yorker, Vulture, Mashable, Slate, The Week, American Theatre, and more. She is the author of the poetry collection Erou (Four Way Books, 2019), which was a finalist for the PEN Open Book Award and winner of the 2020 Poetry by the Sea book award. She is the recipient of a Hodder Fellowship from Princeton’s Lewis Center for the Arts. Her second book, NERD: On Navigating Heroes, Magic, and Fandom in the 21st Century, is forthcoming in summer 2022 by Atria Books. Maya is the inaugural arts critic fellow at The New York Times, where she writes about theater, movies, TV, books, and nerd culture. She lives in Brooklyn.

Accolades & Awards for Erou: Winner of the 2019 Balcones Poetry Prize. Winner of the 2020 Poetry by the Sea First Book Award Reviewed by Stephanie Burt for The New York Times Book Review. “Ode to My Father’s Failed Heart”, a poem from Erou, was selected by Rita Dove for her poetry column in The New York Times Magazine. Maya Phillips Named 2019 Featured Debut Poet by Poets & Writers. Erou was featured in Poets & Writers‘ “Page One” section of their September/October 2019 issue.

Jason Schneiderman is the author of three books of poems: Primary Source (Red Hen Press 2016), winner of the Benjamin Saltman Prize; Striking Surface (Ashland Poetry Press 2010),winner of the Richard Snyder Prize, and Sublimation Point (Four Way Books 2004), a Stahlecker Selection. He edited the anthology Queer: A Reader for Writers (Oxford University Press 2015). His poetry and essays have appeared in numerous journals and anthologies, including American Poetry Review, The Best American Poetry, Poetry London, Grand Street, The Penguin Book of the Sonnet, Story Quarterly, and Tin House. He has received fellowships from Yaddo, The Fine Arts Work Center, and The Bread Loaf Writers’ Conference. He was the recipient of the Emily Dickinson Award from the Poetry Society of America in 2004, and a finalist for the Eric Hoffer Award in 2011. He is an Associate Professor of English at the Borough of Manhattan Community College.