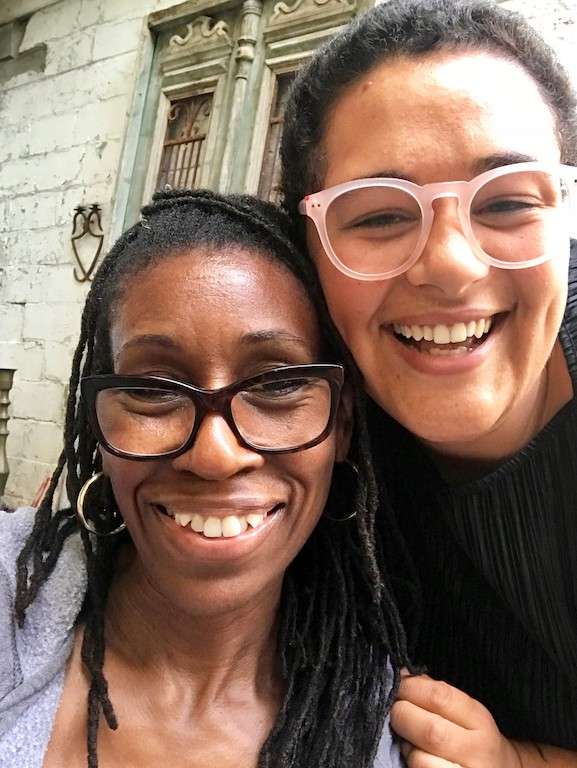 Join the editors and Advisory Committee of Slapering Hol Press as we celebrate the publication of our 2019 and 2020 Conversation Chapbooks: Leading with a Naked Body (2019) and Every Bruise is a Figure of Remembrance (2020).

NB: This event has been moved to Sunday November 8th at 4pm (from Friday the 6th).

Tickets are free for this reading, though donations of all levels are most appreciated. Must pre-register in order to get the Zoom link, which will be emailed at the time of registration. Please check spam filter for this email and contact [email protected] with any questions.

Lyrae Van Clief-Stefanon is the author of Open Interval, a 2009 National Book Award finalist; Black Swan, winner of the 2001 Cave Canem Poetry Prize; Poems in Conversation and a Conversation, a chapbook collaboration with Elizabeth Alexander; Leading with a Naked Body: Poems in Conversation and a Conversation, both published by Slapering Hol Press. She is currently at work on The Coal Tar Colors, her third poetry collection, and Purchase, a collection of essays. She has written plays and lyrics for The Cherry, an Ithaca arts collective. She was one of ten celebrated poets commissioned to write poems inspired by Jacob Lawrence’s Migration Series in conjunction with the 2015 exhibit One-Way Ticket: Jacob Lawrence’s Migration Series and Other Works for MoMA.

Leela Chantrelle is a poet and literature enthusiast hailing from San Francisco, California. She received a Bachelor’s in English and Creative Writing from Cornell University in 2014. She lived in France for a few years and recently moved back to the United States. Currently, she teaches English at a progressive school in Baltimore, Maryland. Her work can be found or is forthcoming in The Menteur, Sundog Lit, Rattle and other publications.

Toi Derricotte is the author of I: New & Selected Poems (University of Pittsburgh Press, 2019), which was a finalist for the National Book Award;The Undertaker’s Daughter (2011); and four earlier collections of poetry, including Tender, winner of the 1998 Paterson Poetry Prize. Her literary memoir, The Black Notebooks (W.W. Norton), received the 1998 Anisfield-Wolf Book Award for Non-Fiction and was a New York Times Notable Book of the Year. Her honors include, among many others, the 2012 Paterson Poetry Prize for Sustained Literary Achievement, the 2012 PEN/Voelcker Award for Poetry, the Lucille Medwick Memorial Award from the Poetry Society of America, three Pushcart Prizes, and the Distinguished Pioneering of the Arts Award from the United Black Artists. Professor Emerita at the University of Pittsburgh, Derricotte co-founded Cave Canem Foundation (with Cornelius Eady); served on the Academy of American Poets’ Board of Chancellors, 2012-2017; and currently serves on Cave Canem’s Board of Directors, Marsh Hawk Press’s Artistic Advisory Board, and the Advisory Board of Alice James Books. She just received the 202 Frost Medal from the Poetry Society of America.

Dawn Lundy Martin is a poet, essayist, and conceptual-video artist. She is the author of four books of poems: Good Stock Strange Blood (Coffee House, 2017); Life in a Box is a Pretty Life (Nightboat Books, 2015); which won the Lambda Literary Award for Lesbian Poetry; DISCIPLINE (Nightboat Books, 2011); A Gathering of Matter / A Matter of Gathering (University of Georgia Press, 2007); and three limited edition chapbooks. Most recently, she co-edited with Erica Hunt an anthology, Letters to the Future: BLACK WOMEN / Radical WRITING (Kore Press, 2018). Her nonfiction can be found in The New Yorker, Harper’s, n+1, and elsewhere. Martin is a Professor of English in the writing program at the University of Pittsburgh and Director of the Center for African American Poetry and Poetics. She is also the recipient of a 2018 NEA Grant in Creative Writing.