An Evening with Yona Harvey, John Murillo, and Jacob Strautmann 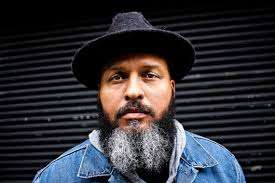 Support these poets and their press by ordering their books on Four Way’s website and use a special HVWC discount when ordering any of the readers’ new books: You Don’t Have to Go to Mars for Love, Kontemporary Amerikan Poetry, and The Land of the Dead Is Open for Business. HVWC2020. Order any (or all of these) three Four Way Books here:

Yona Harvey is an American poet and recipient of the the Kate Tufts Discovery Award for her first poetry collection, Hemming the Water. Her second poetry collection, You Don’t Have to Go to Mars for Love, is forthcoming from Four Way Books in fall 2020. She is among the first black women to write for Marvel Comics since the company’s founding in 1939 and the first black woman to write for the Marvel character Storm.  She facilitates creative writing workshops, delivers writing-specific speaker topics, and has worked with teenagers writing about mental health issues in collaboration with Creative Nonfiction magazine.  Her website is yonaharvey.com. Hemming the Water by Yona Harvey is the recipient of the 2014 Kate Tufts Discovery Award, a finalist for the  2014 Ohioana Book Award, a nominee for the 2014 Hurston/Wright Legacy Award in Poetry, and a finalist for the 2013 IndieFab Award for Poetry. Yona Harvey has been honored with the 2016 Carol Brown Award as an Established Artist.

John Murillo, Kontemporary Amerikan Poetry (Four Way Books, 2020)  is the author of the poetry collection, Up Jump the Boogie (originally from Cypher and reissued from Four Way Books), finalist for both the Kate Tufts Discovery Award and the PEN Open Book Award. His honors include a Pushcart Prize, two Larry Neal writers awards, the J. Howard and Barbara M. J. Wood Prize from the Poetry Foundation, and fellowships from the National Endowment for the Arts, the Bread Loaf Writers’ Conference, the Fine Arts Work Center in Provincetown, the Cave Canem Foundation, the MacDowell Colony, and the Wisconsin Institute for Creative Writing. His poems have appeared in various journals and anthologies including American Poetry Review, Poetry, and Best American Poetry 2017 and 2019. He is an assistant professor of English at Wesleyan University and also teaches in the low-residency MFA program at Sierra Nevada College.

John Murillo’s second book is a reflective look at the legacy of institutional, accepted violence against Blacks and Latinos and the personal and societal wreckage wrought by long histories of subjugation. A sparrow trapped in a car window evokes a mother battered by a father’s fists; a workout at an iron gym recalls a long-ago mentor who pushed the speaker “to become something unbreakable.” The presence of these and poetic forbears—Gil Scott-Heron, Yusef Komunyakaa—provide a context for strength in the face of danger and anger. At the heart of the book is a sonnet crown triggered by the shooting deaths of three Brooklyn men that becomes an extended meditation on the history of racial injustice and the notion of payback as a form of justice. “Maybe memory is the only home / you get,” Murillo writes, “and rage, where you/first learn how fragile the axis/upon which everything tilts.”

The Land of the Dead Is Open for Business is an extended elegy for Jacob Strautmann’s home state of West Virginia and its generations of inhabitants sold out by the false promise of the American Dream. Throughout the book, voices rise up from the page to describe a landscape eroded and plundered by runaway capitalism—its mountain tops leveled by the extractive industries, its waters polluted by runoff from mines—and the fallout from that waste. Those who remain are consigned to life in a ravaged land denuded of nature where birds die and “Sheep/birth limp two-headed things and some / that speak like men if they speak at all.”

Raised in Marshall County, WV, Jacob Strautmann is a recipient of the Massachusetts Poetry Fellowship from the Massachusetts Cultural Council. His poems have appeared in the Boston Globe, Agni Magazine, Salamander Magazine, Southern Humanities Review, Blackbird, and others. He is the Department Manager of Economics at Boston University, where he also teaches playwriting. He lives in Belmont, MA with his partner Valerie Duff and their two children.