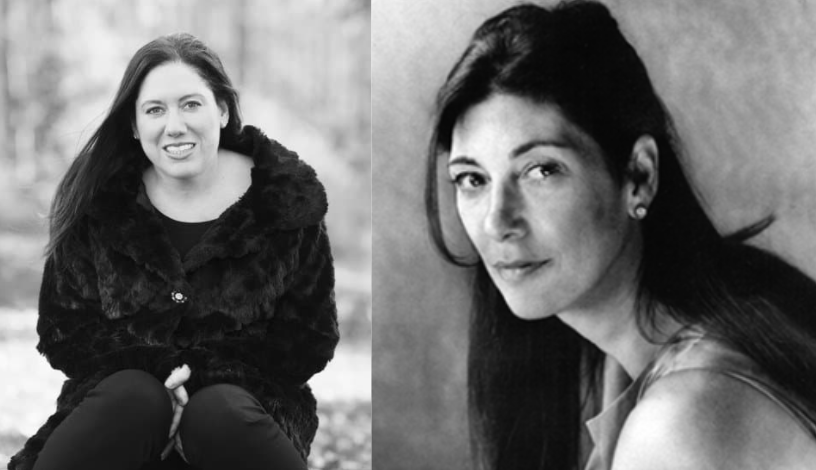 Join us in person (or on Zoom) as Erika Meitner (Useful Junk, BOA, 2022) and Victoria Redel (Paradise, 2022) read from their latest collections.

This event will take place in accordance with the current state and CDC health guidelines. We will be asking attendees to attend in a mask and show proof of vaccination. (Proof of vaccination includes Excelsior Pass or a photo / hard copy of the completed vaccination card.) Please visit our Covid-19 policies page for complete details. We are pleased to report that HVWC will have a retrofitted HVAC system at the time of this reading.

Unable to attend in person? Join our live stream via Zoom. Please register below. You will be sent the Zoom link immediately via email (please check spam filters) or email [email protected] with any questions.

Erika Meitner was born and raised in Queens and Long Island, New York. She attended Dartmouth College (for a BA in Creative Writing and Literature), Hebrew University on a Reynolds Scholarship, and the University of Virginia, where she received her MFA in Creative Writing as a Henry Hoyns Fellow, and her MA in Religious Studies as a Morgenstern Fellow in Jewish Studies. In 2015, she was the US-UK Fulbright Distinguished Scholar in Creative Writing at the Seamus Heaney Centre for Poetry at Queen’s University Belfast, and in 2001-2 she was the Diane Middlebrook Poetry Fellow at the University of Wisconsin Institute for Creative Writing.  She has received additional fellowships from MacDowell, the Virginia Center for Creative Arts, the Hermitage Artist Retreat, the Blue Mountain Center, Bethany Arts, and the Sewanee Writers’ Conference. Her poems have been anthologized widely, and have appeared in publications including The New York Times Magazine, The Southern Review, The Believer, The Kenyon Review, Tin House, The New Republic, Ploughshares, and APR. She also creates larger-scale documentary photo/text projects on urban environments, including “This is Not a Requiem for Detroit” and “RNC CLE” for Virginia Quarterly Review with Ryan Spencer Reed, and a project currently in progress on Miami and sea-level rise with Anna Maria Barry-Jester. Meitner is the author of five books of poems. Her first book, Inventory at the All-Night Drugstore, won the 2002 Robert Dana-Anhinga Prize for Poetry, and was published in 2003 by Anhinga Press. Her second book, Ideal Cities, was selected by Paul Guest as a winner of the 2009 National Poetry Series competition, and was published in 2010 by HarperCollins. Her third collection, Makeshift Instructions for Vigilant Girls, was published by Anhinga Press in 2011. Her fourth collection of poems, Copia, was published by BOA Editions in 2014 as part of their American Poets Continuum Series, and her newest collection, Holy Moly Carry Me, was also published by BOA Editions in September 2018. Holy Moly Carry Me is the winner of the 2018 National Jewish Book Award in poetry, and a finalist for the 2018 National Book Critics Circle award in poetry. Her sixth book of poems, Useful Junk, is forthcoming from BOA Editions in Spring 2022. Meitner is a first-generation American: her father is from Haifa, Israel; her mother was born in a refugee camp in Stuttgart, Germany, which is where her maternal grandparents settled after surviving Auschwitz, Ravensbruck, and Mauthausen concentration camps. In addition to teaching creative writing at UVA, UW-Madison, and UC-Santa Cruz, she has worked as a dating columnist, an office temp, a Hebrew school instructor, a computer programmer, a systems consultant, a lifeguard, a documentary film production assistant, and a middle school teacher in the New York City public school system. As part of her commitment to student mentorship, she is also the creator and steward of the Post-MFA Resources Tumblr. Meitner is currently a Professor of English in the MFA program in Creative Writing and the undergraduate Creative Writing Program at Virginia Tech.
Victoria Redel is the author of four books of poetry and five books of fiction. Her new novel, Before Everything, was published by Viking Penguin in June 2017 and was also published in the U.K., France, Italy, Germany, Poland, Turkey and China. Her novel The Border of Truth (Counterpoint 2007) weaves the situation of refugees and a daughter’s awakening to the history and secrets of her father’s survival and loss. It was a Barnes and Noble Great New Writers Discovery Selection. Loverboy (2001, Graywolf /2002, Harcourt), was awarded the 2001 S. Mariella Gable Novel Award and the 2002 Forward Silver Literary Fiction Prize and was chosen in 2001 as a Los Angeles Times Best Book. Loverboy was adapted for a feature film directed by Kevin Bacon. Swoon (2003, University of Chicago Press), was a finalist for the James Laughlin Award. Her work has been widely anthologized and translated. Redel’s fiction, poetry and essays have appeared in numerous magazines and journals including Granta.com. Harvard Review, The Quarterly, The Literarian, The New York Times, The L.A. Times, O the Oprah magazine, Elle, Bomb, More, and NOON. Redel is on the graduate and undergraduate faculty of Sarah Lawrence College. She has taught in the Graduate Writing Programs of Columbia University and Vermont College. Redel was the McGee Professor at Davidson College. She has received fellowships from The Guggenheim Foundation, The National Endowment For The Arts and the Fine Arts Work Center.  Victoria Redel was born in New York. She is a first generation American of Belgian, Rumanian, Egyptian and Russian and Polish descent. She attended Dartmouth College (BA) and Columbia University (MFA).
+ Google Calendar+ iCal Export