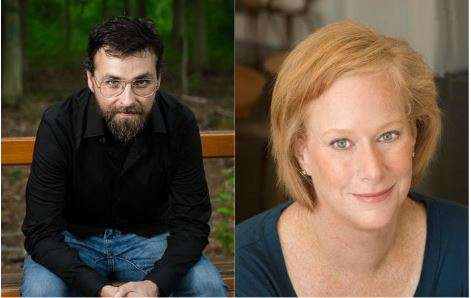 POSTPONED
We regret to have to postpone this event due to Covid. A new date will be released soon.

Please join us for this in person reading which will celebrate the new works of two Hudson Valley authors. The reading will also be live-streamed on Zoom. The Zoom link will be sent at the time of registration and again on the day of the event. Masks are encouraged but not optional for in person attendees. This event is free but your donations are most appreciated.

Michael Paul Kozlowsky is a former high school English & film teacher and, writing as M.P. Kozlowsky, the author of four children’s books — Frost, Juniper Berry, Rose Coffin, and The Dyerville Tales. He lives in Croton-on-Hudson, New York, with his wife, two daughters, and a rescue beagle named Huxley. When he’s not reading or playing chess, he continues to write everything from poetry and screenplays to short stories, articles, philosophical essays, and books for readers of all ages. Scarecrow Has a Gun is his first novel for adults. Visit his website at https://mpkozlowsky.com/

SCARECROW HAS A GUN is the story of a man’s ongoing struggle with tormenting lacunae in his own memory. Tortured by his inability to remember details of his wife’s murder—even though he was an eye witness—Sean Whittlesea pins hopes on a high-tech device purportedly able to provide him with accurate access to every detail of his past. However, a haunting question emerges through Sean’s quest for answers: Are we the masters of our memories, or are we their helpless pawns?

Allison Gilbert is co-author of Listen, World!: How the Intrepid Elsie Robinson Became America’s Most-Read Woman, the first biography of Robinson, once the most influential newspaper columnist in the United States. The book will be published by Seal Press, an imprint of Hachette Book Group, September 27, 2022.

She is host “Women Journalists of 9/11: Their Stories,” a 20-part documentary series produced in collaboration with Wondrium and the National September 11 Memorial & Museum. She interviewed such luminaries as Savannah Guthrie, Maggie Haberman, Dana Bash, and Linda Wertheimer. She is co-executive producer of the companion 2-hour film that featured, among many others, Tom Brokaw, Rehema Ellis, Ann Thompson, Scott Pelley, Byron Pitts, Ann Compton, and Cynthia McFadden. Allison is the official narrator of the 9/11 Memorial Museum’s historical exhibition audio tour, the only female journalist to be so honored.

She writes regularly for the New York Times and other publications. On her blog, she features Q & A’s with some of the most notable names in our culture today including, Arianna Huffington, Jon Stewart, Henry Louis Gates, Jr., Dani Shapiro, Gretchen Rubin, and Susan Orlean.

Allison is co-editor of Covering Catastrophe: Broadcast Journalists Report September 11 and author of Always Too Soon: Voices of Support for Those Who Have Lost Both Parents, Parentless Parents: How the Loss of Our Mothers and Fathers Impacts the Way We Raise Our Children, and Passed and Present: Keeping Memories of Loved Ones Alive.

Allison Gilbert lives in New York with her husband and two children. Visit her website at www.allisongilbert.com.
Her photo credit: Elena Seibert