Play Reading via Zoom: “DA VINCI AT THE DINER” 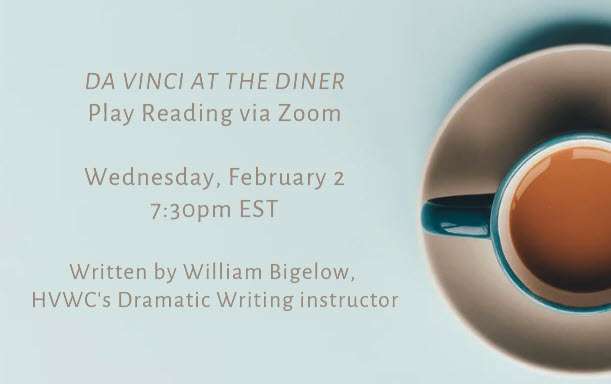 Please join HVWC’s Dramatic Writing instructor William Bigelow as he debuts his latest work via Zoom. The Zoom link is at the bottom of this page.

“DA VINCI AT THE DINER” is the story of Josh, a brilliant twenty-something math prodigy who’s also a schizophrenic. The play follows the relationship Josh has with Leonardo da Vinci who “appears” before Josh inside a New York diner as the result of Josh’s hallucinations. Da Vinci and Josh discuss the intricacies of problem solving, creating art, and finding a place for yourself in the world. As the play develops, Josh wrestles with the dilemma of taking his meds, which will quell his episodes, allowing him to better blend in with the world, but at the same time, the medications make it impossible for Josh to “see” his confidant, da Vinci, the person Josh revers above everyone else. The piece is enhanced by Carla, a waitress; Henry, a retired high school math teacher; and Tony, the diner’s owner.

PLAYWRIGHT: William Bigelow is a screenwriter, television writer, and playwright. His TV writing credits span from Murder, She Wrote to GRIMM on NBC, with many stops in between. His play Leap Year won an Edgerton Award for Best New American Plays of 2013.

DIRECTOR: Tony Simotes is the former Artistic Director of Shakespeare & Company based in the Berkshires. He has worked for major theaters from the New York Shakespeare Festival in New York City to the Mark Taper Forum in Los Angeles. Tony received his MFA from the Tisch School of the Arts at NYU.

ACTORS: Rocco Sisto, Leonardo da Vinci, is a three-time OBIE Award winning actor. He has worked extensively in film and television, most recently as Judge Joe Ellery on Law and Order SVU. He also is a founding member of Shakespeare & Company and holds an MFA from the NYU Graduate Acting program.

Thomas Brazzle, Josh, is an actor, director, playwright and screenwriter. His film and TV credits include Lake Artifact and Boomerang on BET. He has performed at The Guthrie in Minneapolis, Shakespeare and Company in Lenox, Mass, as well as many other theaters. He holds an MFA from UCONN, and is Creative Director of Whet Ink Productions in Atlanta, GA.

Jade Fernandez, Carla, is a film and television actress whose most recent credits include Law and Order: SVU, Creepshow, Little, and Leverage: Redemption. Upcoming work includes the Adrian Lyne thriller Deep Water, and the comedy Strays.

Tom O’Keefe, Tony, recent TV credits include: FBI: Most Wanted, Mrs. America, The Blacklist and the upcoming White House Plumbers on HBO. This Spring he’ll be back on-stage at The Shed in Claudia Rankin’s HELP!

Charls Sedgwick Hall, Henry, is a Chicago based actor and Shakespeare Text Instructor. His favorite memories on the boards are as Touchstone in As You Like it, Charlie in The Complete Works of William Shakespeare (Abridged), Gottlieb Biedermann in The Firebugs and The Mirror in The Next Fairytale. He holds an MFA in Acting from NYU.

HVWC [email protected] is inviting you to a scheduled Zoom meeting.
Topic: DA VINCI AT THE DINER
Time: 07:30 PM Eastern Time (US and Canada) on Feb 2, 2022