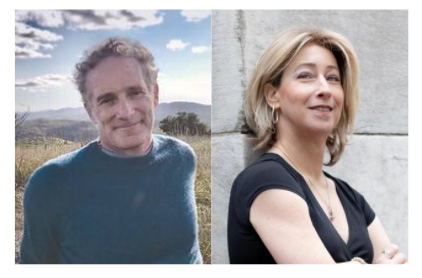 Join us in person at HVWC and on Zoom to hear two astonishing writers read from their memoirs. Journalist Theo Padnos and poet Diana Goetsch have each departed from their usual genre of choice to tell their unique and captivating stories. We cannot wait to hear them read from Blindfold (Scribner, 2021) and This Body I Wore (FSG, 2022).

This event will be held in person and also live streamed via Zoom. The Zoom link will be sent at the time of registration and again on the day of the event. Proof of vaccination is required to attend the reading. In person attendees are asked to follow all our health guidelines at the time of the event. This event is free but your donations are most appreciated.

An award-winning journalist’s extraordinary account of being kidnapped and tortured in Syria by al Qaeda for two years—a revelatory memoir about war, human nature, and endurance that’s “the best of the genre, profound, poetic, and sorrowful” (The Atlantic).

In 2012, American journalist Theo Padnos, fluent in Arabic, Russian, German, and French, traveled to a Turkish border town to write and report on the Syrian civil war. One afternoon in October, while walking through an olive grove, he met three young Syrians—who turned out to be al Qaeda operatives—and they captured him and kept him prisoner for nearly two years. On his first day, in the first of many prisons, Padnos was given a blindfold—a grime-stained scrap of fabric—that was his only possession throughout his horrific ordeal.

Now, Padnos recounts his time in captivity in Syria, where he was frequently tortured at the hands of the al Qaeda affiliate, Jebhat al Nusra. We learn not only about Padnos’s harrowing experience, but we also get a firsthand account of life in a Syrian village, the nature of Islamic prisons, how captors interrogate someone suspected of being CIA, the ways that Islamic fighters shift identities and drift back and forth through the veil of Western civilization, and much more. No other journalist has lived among terrorists for as long as Theo has—and survived. As a resident of thirteen separate prisons in every part of rebel-occupied Syria, Theo witnessed a society adrift amid a steady stream of bombings, executions, torture, prayer, fasting, and exhibitions, all staged by the terrorists. Living within this tide of violence changed not only his personal identity but also profoundly altered his understanding of how to live. Offering fascinating, unprecedented insight into the state of Syria today, Blindfold is “a triumph of the human spirit” (The New York Times Book Review)—combining the emotional power of a captive’s memoir with a journalist’s account of a culture and a nation in conflict that is as urgent and important as ever.

Theo Padnos is the author of Undercover Muslim, which explored everyday life among westerners as they studied in Yemen’s religious academies. He was held prisoner by the Syrian al Qaeda affiliate, Jebhat al Nusra, between 2012 and 2014. A documentary film about his experiences called Theo Who Lived was released in 2016 and was a New York Times Critic’s Pick.

A captivating memoir of one woman’s long journey to late transition, as the trans community emerges alongside her.

Long before Laverne Cox appeared on the cover of Time, far removed from drag and ballroom culture, there were countless trans women living and dying as men, most of whom didn’t even know they were trans. Diana Goetsch’s This Body I Wore chronicles one woman’s long journey to coming out, a path that runs parallel to the emergence of the trans community over the past several decades.

“How can you spend your life face-to-face with an essential truth about yourself and still not see it?” This is a question often asked of trans people, and a question that Goetsch, an award-winning poet and essayist, addresses with the power and complexity of lived reality. She brings us into her childhood, her time as a dynamic and beloved teacher at Stuyvesant High School, and her plunge into the crossdressing subculture of New York in the 1980s and ’90s. Under cover of night, crossdressers risked their jobs and their safety to give expression to urges they could neither control nor understand. Many of them would become late transitioners, the Cinderellas of the trans community largely ignored by history.

Diana Goetsch is an American poet, author of eight collections, including In America (a 2017 Rattle Chapbook Prize selection), Nameless Boy (2015, Orchises Press) and The Job of Being Everybody, which won the 2004 Cleveland State University Poetry Center Open Competition. Her poems have appeared in leading magazines and anthologies including The New Yorker, Poetry, The Gettysburg Review, The Iowa Review, Ploughshares, The Southern Review and Best American Poetry. She is also a nonfiction writer and columnist, author of the “Life in Transition” blog at The American Scholar, and This Body I Wore, a memoir forthcoming from Farrar, Straus & Giroux. Her honors include fellowships from the National Endowment for the Arts, the New York Foundation for the Arts, the Donald Murray Prize for writing pedagogy, and a Pushcart Prize. Goetsch was born in Brooklyn, NY and grew up in Northport, Long Island, where she graduated high school. She attended Wesleyan University (BA, Religion), New York University (MA, American Civilization) and Vermont College of Fine Arts (MFA, Poetry). For 21 years she was a New York City public school teacher, at Stuyvesant High School, where she taught gifted and mostly immigrant children, and at Passages Academy in the Bronx, where she ran a creative writing program for incarcerated teens.

Praise for This Body I Wore:

“Diana Goetsch has written a book that many will cherish and few will forget. It’s a memoir of teaching and romance, a story of New York City and the perhaps-now-vanishing world of transvestite culture. It’s a trans journey, of course, and it’s also a poet’s memoir. Finally, it’s a story about meditation and Buddhism: some of us need another world, a world of the spirit, before we can live or become ourselves in this one, and Goetsch has now shown us why.”—Stephanie Burt, author of Don’t Read Poetry

Goetsch has not written a transition memoir, but rather a full account of a trans life, one both unusually public and closeted. All too often trans lives are reduced to before-and-after photos, but what if that before photo lasted fifty years?

“An important and beautiful memoir.”
—Emily Firetog, Lit Hub, “Most Anticipated Books of 2022”

“Lyrical, harrowing, and wise. This Body I Wore, the story of one woman doing everything she can to avoid becoming herself, is a universal and profound meditation on the price of authenticity.”
—Jennifer Finney Boylan, author of She’s Not There and Good Boy

“In This Body I Wore, Diana Goetsch the poet is present in every line of prose. The writing is spacious, beautiful, precise, and poignant. The reader floats through the sentences, entranced. Magnificent is not an overstatement.”
—Thomas Peele, Pulitzer Prize–winning journalist and author of Killing the Messenger

“Moving and vividly recalled, This Body I Wore conjures the pain of a life in search of language for who you are. Goetsch has written a powerful testimony of the need for transgender acceptance.”
—Alex Marzano-Lesnevich, author of The Fact of a Body

“This Body I Wore is one of the most honest, unflappable, important books I’ve read in a long time. Diana Goetsch writes about her struggles and triumphs with family, love, and gender identity with lyricism and grace. Everyone should be required to read this book.”
—Ann Hood, author of Kitchen Yarns: Notes on Life, Love, and Food

“Clear, thoughtful, and deeply moving, This Body I Wore is an affirmation to anyone who has struggled to live an authentic life.”
—Ellen Bass, author of Indigo

“This Body I Wore is startling, humorous, haunting, and truly illuminating. I had chills when I began reading it, and was floored by the end. Diana Goetsch, once known as ‘Frank McCourt’s replacement’ at Stuyvesant High School, has achieved a pitch-perfect memoir of her own.”
—Laurie Gwen Shapiro, author of The Stowaway

“The perfect prescription for today’s world—compelling and lyrical in equal measure. A riveting read!”
—Danielle Ofri, MD, author of What Doctors Feel