An Afternoon of Poetry with Monica Youn & Joshua Bennett (via Zoom) 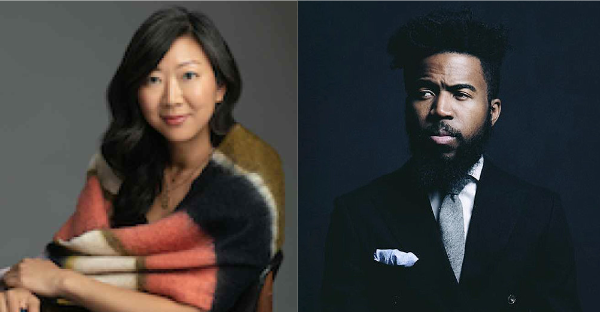 Join us on Zoom as we welcome Monica Youn & Joshua Bennett to read from their latest poetry collections, From From (Graywolf, March 2023) and The Study of Human Life (Penguin, September 2022).

About From From: “From From is equal parts comic and tragic, clinical and wrenching. Monica Youn’s parables and studies are devastating meditations on the sadism of whiteness and the abjection of racial containment. Youn’s strongest work to date . . . singular and absolutely extraordinary.”—Cathy Park Hong

“Where are you from . . . ? No—where are you from from?” It’s a question every Asian American gets asked as part of an incessant chorus saying you’ll never belong here, you’re a perpetual foreigner, you’ll always be seen as an alien, an object, or a threat.

Monica Youn’s From From brilliantly evokes the conflicted consciousness of deracination. If you have no core of “authenticity,” no experience of your so-called homeland, how do you piece together an Asian American identity out of Westerners’ ideas about Asians? Your sense of yourself is part stereotype, part aspiration, part guilt. In this dazzling collection, one sequence deconstructs the sounds and letters of the word “deracinations” to create a sonic landscape of micro- and macroaggressions, assimilation, and self-doubt. A kaleidoscopic personal essay explores the racial positioning of Asian Americans and the epidemic of anti-Asian hate. Several poems titled “Study of Two Figures” anatomize and dissect the Asian other: Midas the striving, nouveau-riche father; Dr. Seuss and the imaginary daughter Chrysanthemum-Pearl he invented while authoring his anti-Japanese propaganda campaign; Pasiphaë, mother of the minotaur, and Sado, the eighteenth-century Korean prince, both condemned to containers allegorical and actual. From From is an extraordinary collection by a poet whose daring and inventive works are among the most vital in contemporary literature.

About The Study of Human Life:

An acclaimed poet further extends his range into the realm of speculative fiction, while addressing issues as varied as abolition, Black ecological consciousness, and the boundless promise of parenthoodFeaturing the novella “The Book of Mycah,” soon to be adapted by Lena Waithe’s Hillman Grad Productions & Warner Bros. TVAcross three sequences, Joshua Bennett’s new book recalls and reimagines social worlds almost but not entirely lost, all while gesturing toward the ones we are building even now, in the midst of a state of emergency, together. Bennett opens with a set of autobiographical poems that deal with themes of family, life, death, vulnerability, and the joys and dreams of youth. The central section, “The Book of Mycah,” features an alternate history where Malcolm X is resurrected from the dead, as is a young black man shot by the police some fifty years later in Brooklyn. The final section of The Study of Human Life are poems that Bennett has written about fatherhood, on the heels of his own first child being born last fall.

Joshua Bennett is a Professor of English and Creative Writing at Dartmouth College. In addition to The Study of Human Life, he is the author of three books of poetry and literary criticism: The Sobbing School (Penguin, 2016)—which was a National Poetry Series selection and a finalist for an NAACP Image Award—Being Property Once Myself (Harvard University Press, 2020) and Owed (Penguin, 2020). Bennett holds a Ph.D. in English from Princeton University, and an M.A. in Theatre and Performance Studies from the University of Warwick, where he was a Marshall Scholar. In 2021, he received the Whiting Award for Poetry and Nonfiction.Bennett has recited his original works at venues such as the Sundance Film Festival, the NAACP Image Awards, and President Obama’s Evening of Poetry and Music at the White House. He has also performed and taught creative writing workshops at hundreds of middle schools, high schools, colleges, and universities across the United States, as well as in the U.K. and South Africa. Bennett’s writing has been published in The Best American Poetry, The New York Times, The Paris Review and elsewhere. He has received fellowships from the Guggenheim Foundation, the National Endowment for the Arts, MIT, and the Society of Fellows at Harvard University. His first work of narrative nonfiction, Spoken Word: A Cultural History, is forthcoming from Knopf on March 28, 2023.