Join us online Oct. 30 for our first virtual Gala!

During this uncharted time we all face, the Hudson Valley Writers Center has managed to continue connecting, communicating and creating, but now in a virtual world. To ensure the safety of our entire community—students, guests and staff— we have successfully transitioned our complete program of workshops and readings to an online format.​ This now also includes our GALA. 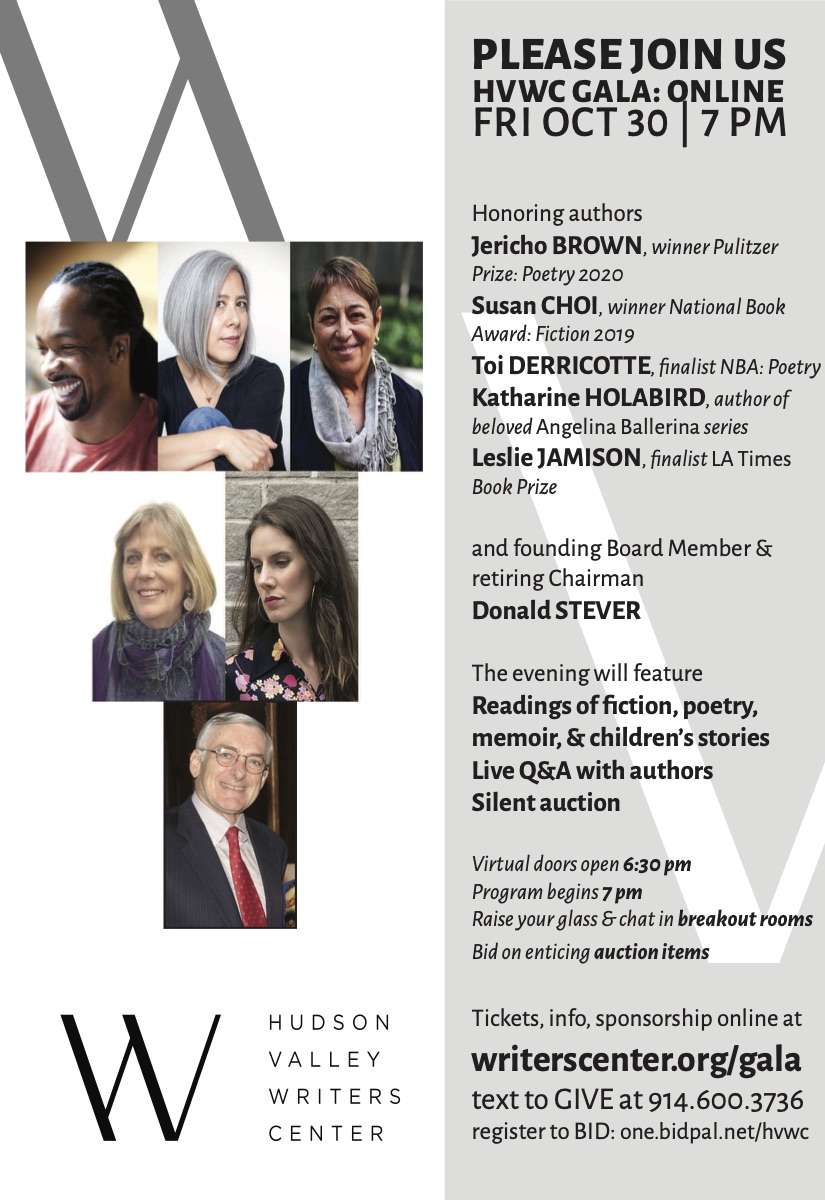 We will hold our annual benefit ​​on Friday evening, OCTOBER 30​, 2020, at 7 pm, via Zoom. In line with our mission to celebrate the highest quality literature across genres we are proud to honor ​Jericho Brown (winner of the 2020 Pulitzer Prize in Poetry; Susan Choi (Winner of the 2019 National Book Award for Fiction); ​Toi Derricotte (Finalist for the 2019 National Book Award in Poetry); Katharine Holabird​ (author of the Angelina Ballerina series of Children’s Literature); and ​Leslie Jamison (Finalist for the Los Angeles Times Book Prize). They will read from their latest works and join us for live discussion that evening. We will also be honoring Donald Stever, founding Board member who is stepping down as Chair at the end of this year. We are endlessly grateful for his service.

Our auction is live now, offering items specifically attuned to what people may want and need in this challenging environment, such as cultural experiences, learning opportunities, health and sports packages (and of course fine wine!). Whether or not you come to the gala, you are welcome to check out the auction and start your bidding!

How can you get involved?

We welcome you to reach out with any questions and stay tuned here for any updates.

Businesses donating auction items or becoming sponsors will immediately receive promotional benefits across our many online platforms, including our website, social media, newsletters, and visual and spoken recognition on the night of the gala. One of the silver linings of holding our classes and now our benefit online is the increased national audience we can attract. With the caliber of honored authors and an intense publicity campaign, we expect a large and diverse audience for our benefit, significantly increased over previous in-person galas. We hope you will join us.

Ways to participate in or support our online gala

Reserve your virtual seat now for our biggest party of the year. Tickets available per “table”, per person, and with deeply discounted rates for HVWC students/instructors.

We welcome sponsorships at various levels with the benefits of exposure in our newsletters, social media, on our website, and during gala night itself.

Our Gala Auction is open and welcomes your bids on enticing items from intangible experiences to fine goods. Click here to start shopping.

Click to customize your personal crowdsourcing page to help raise money and/or fill your virtual table.

This year we honor

Jericho Brown is the recipient of a Whiting Writers’ Award and fellowships from the John Simon Guggenheim Foundation, the Radcliffe Institute for Advanced Study at Harvard University, and the National Endowment for the Arts. Brown’s first book, Please (2008), won the American Book Award. His second book, The New Testament (2014), won the Anisfield-Wolf Book Award and was named one of the best of the year by Library Journal, Coldfront, and the Academy of American Poets. He is also the author of the collection The Tradition (2019), which was a finalist for the 2019 National Book Award and the winner of the 2020 Pulitzer Prize for Poetry. His poems have appeared in Buzzfeed, The Nation, The New York Times, The New Yorker, The New Republic, Time, and The Pushcart Prize Anthology, and several volumes of The Best American Poetry anthologies. He is an associate professor and the director of the Creative Writing Program at Emory University in Atlanta.

Susan Choi’s first novel, The Foreign Student, won the Asian-American Literary Award for fiction.  Her second novel, American Woman, was a finalist for the 2004 Pulitzer Prize. Her third novel, A Person of Interest, was a finalist for the 2009 PEN/Faulkner Award. In 2010 she was named the inaugural recipient of the PEN/W.G. Sebald Award. Her fourth novel, My Education, received a 2014 Lammy Award. Her fifth novel Trust Exercise (April 2019) won the National Book Award for Fiction. Her first book for children is Camp Tiger (May 2019). A recipient of fellowships from the National Endowment for the Arts and the Guggenheim Foundation, she teaches fiction writing at Yale and lives in Brooklyn.

Toi Derricotte is the author of I: New & Selected Poems (University of Pittsburgh Press, 2019), which was a finalist for the National Book Award;The Undertaker’s Daughter (2011); and four earlier collections of poetry, including Tender, winner of the 1998 Paterson Poetry Prize. Her literary memoir, The Black Notebooks (W.W. Norton), received the 1998 Anisfield-Wolf Book Award for Non-Fiction and was a New York Times Notable Book of the Year. Her honors include, among many others, the 2012 Paterson Poetry Prize for Sustained Literary Achievement, the 2012 PEN/Voelcker Award for Poetry, the Lucille Medwick Memorial Award from the Poetry Society of America, three Pushcart Prizes, and the Distinguished Pioneering of the Arts Award from the United Black Artists. Professor Emerita at the University of Pittsburgh, Derricotte co-founded Cave Canem Foundation (with Cornelius Eady); served on the Academy of American Poets’ Board of Chancellors, 2012-2017; and currently serves on Cave Canem’s Board of Directors.

Katharine Holabird ​is the award-winning author of  Angelina Ballerina and a new children’s book series about a lovable little fairy called Twinkle. Katharine grew up in a family of architects and artists in Chicago, and as a child she loved to perform and dance with her three sisters. She graduated with a BA in Literature from Bennington College, and started writing children’s books in 1983. Since then, Angelina Ballerina books have sold millions of copies, been translated into 20+ languages, and Angelina has become a children’s classic.

Leslie Jamison was born in Washington, DC, and grew up in Los Angeles. A graduate of Harvard College and the Iowa’s Workshop, she is the author of the essay collection The Empathy Exams, a New York Times bestseller; the novel The Gin Closet, a finalist for the Los Angeles Times Book Prize, the memoir The Recovering; and most recently the essay collection, Make it Scream, Make it Burn. Her work has appeared in the New York Times Magazine, Harper’s, and the Oxford American, among others, and she is a columnist for the New York Times Book Review. She teaches at Columbia University and lives in Brooklyn

Donald Stever spent his 50-year career as a prominent environmental lawyer. He is a fellow of the American College of Environmental Lawyers and was Of Counsel to the law firm K&L Gates LLP, based in the firm’s New York office. He is a widely published author, and his works include, among many others, the multi-volume treatise, Law of Chemical Regulation and Hazardous Waste and an award winning analysis of nuclear power plant licensing, Seabrook and the Nuclear Regulatory Commission. He is a past board chair of the Environmental Law Institute in Washington DC, and currently serves on the boards of directors of Friends of the Rockefeller State Park Preserve and Teatown Lake Reservation.  He is a founding board member of the Hudson Valley Writers Center and will be retiring as Board Chair at the end of this year.

How it works online

Our online gala will be a multi-faceted online affair that does its best to mimic our traditional annual gala in many ways while maximizing the benefits of this new medium. You will receive a link to the live Zoom event when you buy tickets. In addition to the live stream, recorded readings, and conversations with the authors, we will be able to break people out into their respective “virtual table” groups for more intimate time in a Zoom room to chat with your guests. Running alongside this will be our first ever virtual auction, where you can visit a special webpage to place your bids and check on your favorite items throughout the evening.

We welcome you to get dressed up (or be cozy, up to you!), BYO cocktails and bites, and share pictures of your fun with us that night through our various social media channels.

Thanks to our 2020 Sponsors