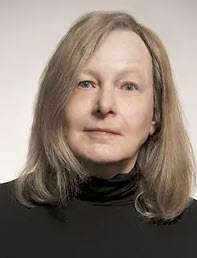 Joan Houlihan is the author of five books of poetry, most recently, Shadow-feast (Four Way Books, 2018). Other books include Hand-Held Executions: Poems & Essays (2003); The Mending Worm (2006 Green Rose Award from New Issues Press); The Us (2009; Must-Read distinction from the Massachusetts Center for the Book), and Ay (2014), a sequel to The Us, both from Tupelo Press. In addition to publishing in a wide array of journals, including Boston Review, Columbia: A Journal of Literature and Arts, Gettysburg Review, Gulf Coast, Harvard Review, Plume andPoetry, her poems have been anthologized in The Iowa Anthology of New American Poetries (University of Iowa Press, 2005); The Book of Irish-American Poetry, 18th Century to Present, (University of Notre Dame, 2007); The World Is Charged: Poetic Engagements with Gerard Manley Hopkins, (Clemson University Press, 2016), and The Eloquent Poem: 128 Contemporary Poems and Their Making (Persea Books, 2019). She has taught at Columbia University, Emerson College and Smith College. She currently serves on the faculty of Lesley University’s Low-Residency MFA in Creative Writing Program in Cambridge, Massachusetts and is Professor of Practice in Poetry at Clark University in Worcester, Massachusetts. Houlihan founded and directs the Colrain Poetry Manuscript Conference.