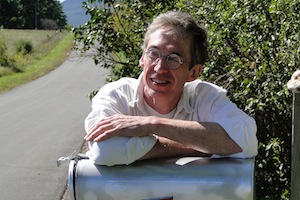 Peter Bricklebank has published fiction in such journals as The American Voice, Carolina Quarterly, Mid-American Review, Kansas Quarterly, Confrontation. He has published fiction, and nonfiction in The New York Times Book Review, the American Book Review, The Chicago Tribune. His chapter on writing essay and memoir appears in The Portable MFA (Writers Digest Books), and his latest nonfiction appears in the inaugural issue of Two Bridges Review. He has received a New York Foundation for the Arts fellowship in fiction and been a panelist for the BRIO awards for the Bronx Council of the Arts He has taught private writing workshops in NYC and in Oaxaca and Morelia (Mexico) and at New York University and elsewhere, including a year as Nonfiction writer-in-residence at Central Connecticut State University. He taught fiction and nonfiction at Bar-Ilan University in Israel in summer 2012 and taught at the Festival of Writers, Rensselaerville, New York in August 2013. As well as at HVWC, he currently teaches in the online graduate program of National University and the Writing Institute at Sarah Lawrence.
View Winter|Spring 2020 Program Brochure