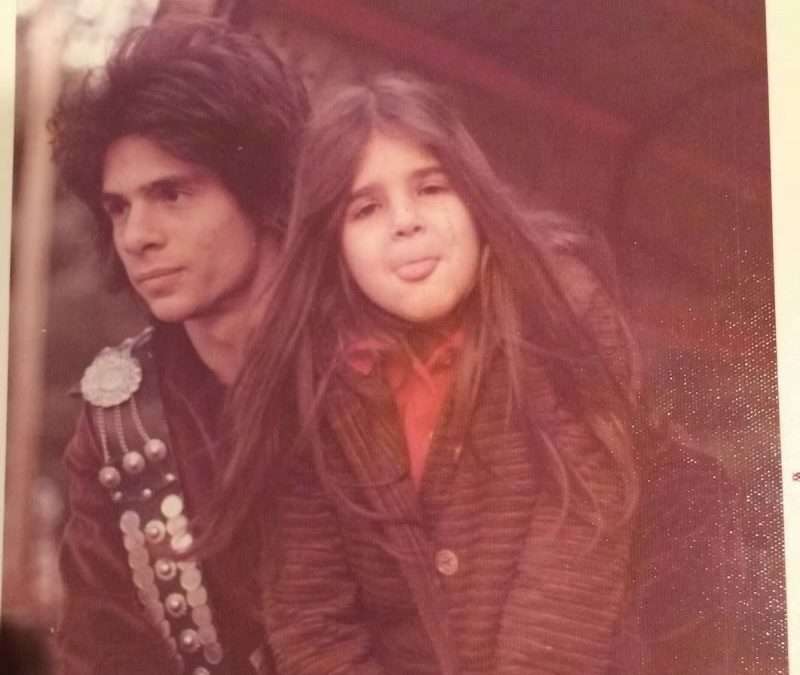 Dorian talked to me like I was an equal, even though he was an adult in his late 20s and I was a child of 13.  Debi, our sister, was closer to Dorian’s age and like a mother to me.

Sometimes Dorian did unsafe things or said things an adult wouldn’t say, which made me concerned but not enough to tell our parents, except once when he found a gun and shot it in our room.

We used to take long ambling walks with our Doberman late at night in our Queens neighborhood.  Across from our house was my cousin’s house.  Her parents divorced and she no longer lived there, but I knew the house well.  Next door on one side was Adrian, who was from Haiti and whose dad had a yellow taxi in their driveway.  On the other side was Anabelle, an only child who was a little odd, maybe because of that.  We walked past Jay’s house, a large white brick structure. He was three years older than I and an Orthodox Jew.  I liked talking to him, but I hated when Debi said he had a crush on me. “I gave him $5, so you have to marry him!”  We passed a small stucco house where another only son lived with his parents.  He was Debi’s age, and he killed himself one day. He was a dentist.  We turned the corner and passed the Greenbergs’ house, another family from Lebanon who were close to my parents.  Their son was bar mitzvahed in the backyard when I was six. We walked on 112th Street, right by a home for foster children. This is where we sometimes encountered a pack of dogs.  I was scared for my dog because although he was fierce, he was outnumbered. We went all the way to the high school, with its large dark running track surrounded by a fence. On the way home we passed Barry’s house, the local stoner. His was the most beautiful – red brick with stained glass windows and a purple kitchen. Barry jogged obsessively before jogging was even a thing.

Dorian and I talked a lot on these walks, and he called me Arn, even though that wasn’t my name.

“Arn, let’s go swimming,” he said one night.  He said he knew of a great pool:  John Jay Pool on the Upper East Side.  We rushed home to pick up our bathing suits, then got into his black Camaro. The windows were open, and the night air was thick with summer as we drove up 68th Drive, passing the Annex, where the local boys played stickball, and then 108th Street and Yellowstone Blvd, until we came to Queens Blvd, which we took to the 59th Street Bridge.  Dorian had his left foot resting on the dashboard as we drove, his long brown hair fluttering in the wind and his large nose sitting perfectly on his face as he smiled. “This is going to be so fun,” he shouted above the motor, which rumbled below my feet.

Once at the pool, I stared at the tall black gate.  It had spokes on the top.  I clasped an iron post in each hand and peered into the long still pool.  Dorian pressed his Chinese slippers firmly onto the bars and shimmied up like it was nothing. He perched on the top and waited for me to join him.  He had so much confidence in my abilities to climb that when he held out his hand to me, I somehow reached him, surprising myself.  Once at the top, I put my arms around his neck as he lifted me over the spokes.

I took off my Levi’s as Dorian dove in, his body sliding into the pool without a sound, and started his methodical laps.  When Dorian swam, It looked like he was part of the water, gliding through, barely breaking the surface or making a ripple.  He was muscular and lean, his hair streaming dark in the night.

I slipped into the inky pool and floated on my back, my ears submerged, staring at the sky.  It felt like I was the only person in the world.  Water usually scared me, and the empty pool was eerie, but if I looked towards my brother, I could get my breathing back to normal.  The multitude of cars on the FDR Drive below us seemed far away.

I’m not sure why I agreed to go wherever Dorian suggested.  Maybe I said something like “Are you sure this is a good idea?” or “Are we going to get in trouble?”, but in the end, I always followed him.  Almost every outing turned into an adventure.  My parents didn’t seem to worry, and anyway, they had lives of their own.  They often went out with friends and came home late, assuming I was tucked in bed or with one of my siblings.

On the way home in wet jeans, we took a detour to Mamoun’s, on MacDougal Street in the West Village. It was a small, narrow place with dark walls. It had Lebanese takeout food and was open all night.   It smelled of mint and cardamom and meat. We got shawarmas, meat shaved off a gyro stand and stuffed into a pita with tahine, lettuce, and liffit. We ate them on a stoop across the street, where we sat bent over and let the tahine drip to the ground between our feet.  No matter how many napkins we had, it was never enough. The tea was hot and sweet in Styrofoam cups, just the way we liked it.  Sated and tired, we people-watched in silence, blowing on our tea. “All right, Arn, let’s head home,” he said.

He drove us back to Queens, the motor’s hum pulling me to close my eyes, my beautiful brother by my side.

Leslie Lisbona was a banker when she walked into Susan’s class 12 years ago.  The best decision she ever made.