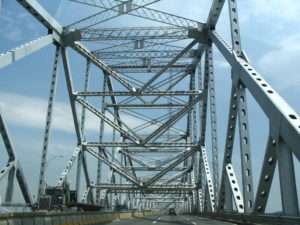 Over. Under. East. West. North. South. The Tappan Zee Bridge has ferried me from childhood into adulthood.

Loaded into the back of Mom’s Ford wagon, the five youngest of my parents’ 13 children would travel west from White Plains over the bridge, then north to Windham Mountain to ski. On the way back, crossing the Hudson River east, the view of Lyndhurst castle signaled I was almost home.

In my early twenties, I drove 25 miles west for a date with a man named John in Chestnut Ridge, and a romance was born. Engaged, then married, I left my family to move to Rockland. Of my commute to Westchester for family visits, my mother lamented, “I hate to think of you crossing that bridge!”

I travelled across that span countless times as our family grew. Beach traffic to the shore posed a threat for Jack’s June 17th arrival. When Liam was due, I fantasized about a police escort. “Hurry!” I panted from the back seat. Luckily, the 4am crossing was a snap.

A family of five needs a boat, John said. We named her “Carey’d Aweigh,” docked her in Piermont, and buckled up our children’s lifejackets as we motored north. The kids would scream as we passed under the lower causeway, the massive metal structure echoing back their cries. As they grew, they loved tubing, water skiing, and wakeboarding under the bridge. But, like London Bridge of nursery rhyme fame, ours was falling down!

Construction began on a new, dual span. An engineering feat unfolded as giant steel pylons were pounded with ear-splitting loudness into the depths of the river. We motored around the construction, gazing at the wonder before us. The Left Coast Lifter, the largest crane on water, travelled from San Francisco across the Panama Canal to Nyack-Tarrytown. Excitement grew as we watched the progress from above and below: north-south on-the-river boating showed us a completed roadway; east-west in-auto crossings revealed installed lighting and signage.

Now that the kids are off to college and beyond, John and I are embracing the empty nest. Evenings we drop anchor on the river to watch the sun set; the lights on the bridges – new and old – paint a diamond tiara in the purple-orange sky. We are eager for the opening of the western-bound span. Soon, a promised bike/pedestrian path will offer us a new way to travel across our beloved Hudson. Instead of seatbelts or lifejackets, we’ll strap on our helmets for an active journey: this time on two wheels, moving forward, a bridge into the next phase of our lives.

“Tappan Zee Bridge Prose” was one of four short pieces written by Hudson Valley Writers Center-affiliated writers selected to participate in “Bridging Art,” a celebration of the Tappan Zee Bridge and its replacement, the Gov. Mario Cuomo Bridge. Eileen McGovern Carey presented her work in front of an audience of 50 during the celebration’s showcase in September.