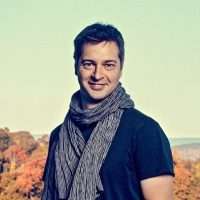 Michael Quattrone is a poet and songwriter who lives in Tarrytown,  New York, with his wife, Kala Smith, three teenage children, and many animals.

Michael supports the arts, social justice, democracy and the climate by serving on the boards of  two family foundations: the David Rockefeller Fund and the Rockefeller Brothers Fund, where  he sits on the Pocantico Committee; and two nonprofit organizations: Rockefeller Philanthropy  Advisors and A Blade of Grass. In 2011, Michael and Kala founded Hearthfire, a creative retreat  project that fosters community and connection through experiences of earth, art, and heart.

Michael’s first love was the theater. In addition to acting and mentoring with Visible Theater in  NYC, he has taught the history of Modern Theater and Drama at Johns Hopkins University, and  Shakespeare in the Boroughs with the Public Theater’s Shakespeare Lab. He earned degrees  from Northwestern University (BS) and the New School (MFA).

Michael joined the community of the Hudson Valley Writers Center in January of 2020, and has  remained enrolled in weekly poetry workshops ever since. He currently studies with Jennifer  Franklin, and his first full-length poetry manuscript is getting ready for a title and a press.