“Into the ‘headwaters of hurt’ is where Spree MacDonald takes us, between branches that overhang and roots that trip, with a jambalaya of words and references that in the end prove the only way out of here. This writer uses his own weaknesses, his ‘blunder toe,’ to navigate a treacherous landscape, bringing the whole country to bear witness to the swamp living in its belly. At play with sound and music, he charges into this ‘labor hood of Atlantis,’ this ‘poorly lit paradise.’ Here is a spirit, wise, but not jaded, chided, but not overruled. Milksop Codicil is a poetic trance, full of bayou magic, and common sense.”

A stunning contribution, and a gift of rare honey in rock hard times. McDonald combs through the ruins of empire, and environmental collapse with a punishing clarity to make something torn and new. Few thinkers have written so deftly of whiteness from within, and McDonald’s keen ear for the rites of black joy is a testimony to what a politics of love might sound like. This poetry dances us into revolution.” 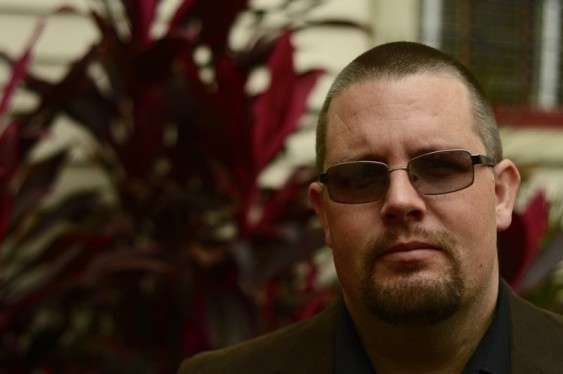 A review from New Pages.

A review of Milksop Codicil from RM220 Literary Journal.

Spree MacDonald lives in South Louisiana with his wife and three daughters. His first chapbook, Milksop Codicil, won the Slapering Hol Chapbook Competition and was published in 2017. His poetry has been featured in journals such as RHINO, Warscapes, Transition Magazine, and Berkeley Poetry Review, and has been a finalist for the Anhinga Press Rick Campbell Chapbook Prize, a semi-finalist for the Philip Levine Prize in Poetry, and nominated for a Pushcart Prize.