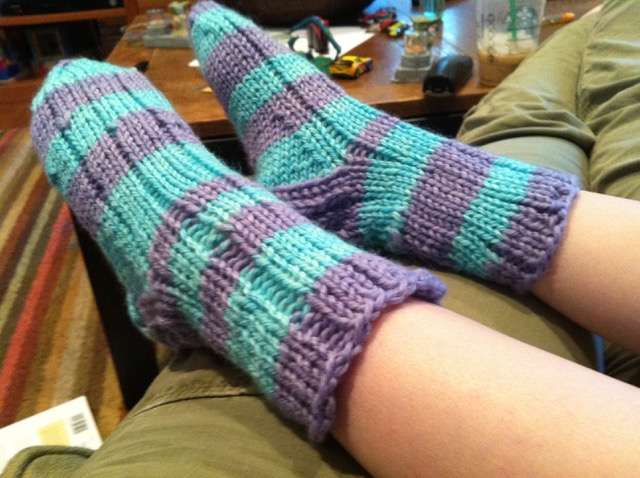 The last picture he drew was of a sock. Periwinkle and turquoise blue stripes. Magic markers firmly pressed on white paper by a small, tender, five-year-old hand. Drawing his final wish, just a few days before he died.

I had learned to knit a few months prior, when we were still living at Sloan Kettering, in the large corner room on the pediatric floor. Leo was attached to an elaborate setup of medical pumps that needed space. Plus, because we were there for a long time, there was an extra bed in the corner for me or David, a big wall for Leo’s posters and drawings, a bathroom with a shower. People wandered in and out all day: the early morning cleaning staff, nurses, doctors, social workers, and endless volunteers, wanting only to offer him a bit of joy. They brought toys and candy. They sang to us and gave Leo karate lessons. There were some celebrities and even Santa on Christmas morning. I hated it; there was no privacy, and it was a constant reminder that we were to be pitied.

One day an older woman came in carrying a big bag of knitting supplies, hoping to find a mom who wanted to knit. She brought diversion and purpose, and I needed those things desperately. My grandmother had taught me when I was young, but I had long forgotten how. The woman and I talked a bit. She was petite, with a compact body and salt-and-pepper hair. She dressed warmly, a reminder that outside it was winter. She seemed determined to wait for me to soften, which I eventually did. She left me needles and yarn and a sweet new escape.

There weren’t many things to distract me from hospital life. I couldn’t look at social media without feeling sick and separate, and I couldn’t find books sad enough to comfort me. I had to be alert at all times, tending to my son and fielding all those comings and goings. Knitting became a meditation. I could snuggle next to Leo in the hospital bed while he tapped away at the iPad. Stitch after stitch, focused only on the warmth of him next to me, the colors, the gentle click of the metal needles. And I could snap back to present whenever necessary.

After Leo’s bone marrow transplant, during the short weeks that we lived triumphantly back home, I continued my pursuit. I made blankets and hats, socks for Hannah, two tiny sweaters for my best friend’s newborn twins. I bought books of patterns online and the most expensive cashmere and wool in bright, happy colors.

The night we learned that Leo’s cancer had come back, I was in the middle of knitting a blanket for a friend. We have a video of Leo and Hannah dancing together, taken moments before the phone rang. Dr. Small telling us that the spinal fluid taken just that morning had shown a recurrence. No more triumph: We had to go back. In the background of the video, I’m sitting on the sofa, needles and stitches in my hands, smiling and laughing at my dancing children, oblivious to the horrible news that would arrive seconds later.

Leo spent his last days on the downstairs sofa, no longer himself. He’d stopped talking, stopped eating. He spent most of his time asleep. He was surrounded by medicine bottles, oxygen, tubes, stuffed animals and tearful visitors. And me, furiously knitting the socks he would be buried in. Stripes like he had requested days earlier, when I told him I wanted to make him perfect socks. When I couldn’t tell him he was dying. What was I thinking? Why did I decide it would be a good idea to knit socks for my dying son? And then he opened his eyes and looked over at me, and his small body produced words.  Not like that, he grumbled, I was doing it wrong.

I began to panic. I didn’t know if I had days left, or hours. Could I start over and somehow make for him the socks he envisioned, that would exist under the ground longer than his little body? I didn’t have a choice: I needed to do this for him. Please, Leo, tell me exactly what you want.

And then he did. His hands found strength to point and grab, somehow requesting paper and markers. Defiantly and with purpose he drew a little scraggly sock. I could see now that I had gotten the colors right, but the stripes were much different. I spent the next day making his socks, just as he wished. The last photo that I have of Leo is of his feet, covered in beautiful purple and blue cashmere stripes.

After Leo died, he left our home wrapped in blankets and wearing the socks. I took his drawing to the frame shop. I wanted to hang it proudly on the wall. My boy, his dying wish, here for me to look at every day. I cried when I had to leave the drawing behind. Please take care of it. And they did. A vibrant striped sock, matted in crisp white with a thin wood frame painted with muted distressed silver.

But it’s not hanging on the wall. I can’t look at it. It’s on the top shelf of my closet in bubble wrap. I pull it out every now and then, wondering if maybe I’m ready. Now I don’t think I ever will be. I don’t ever want to look at it again. I just want Leo, snuggling next to me, wearing any old sock.

Caitlin Daniels Israel lives in Larchmont with her husband and two daughters. She joined Susan Hodara’s class in 2021 and is currently writing a memoir about her son, Leo, among other things, his fuzzy chemo head and the beautiful gifts he’s given his loving family.