The Hall Closet By Katharine Krahl 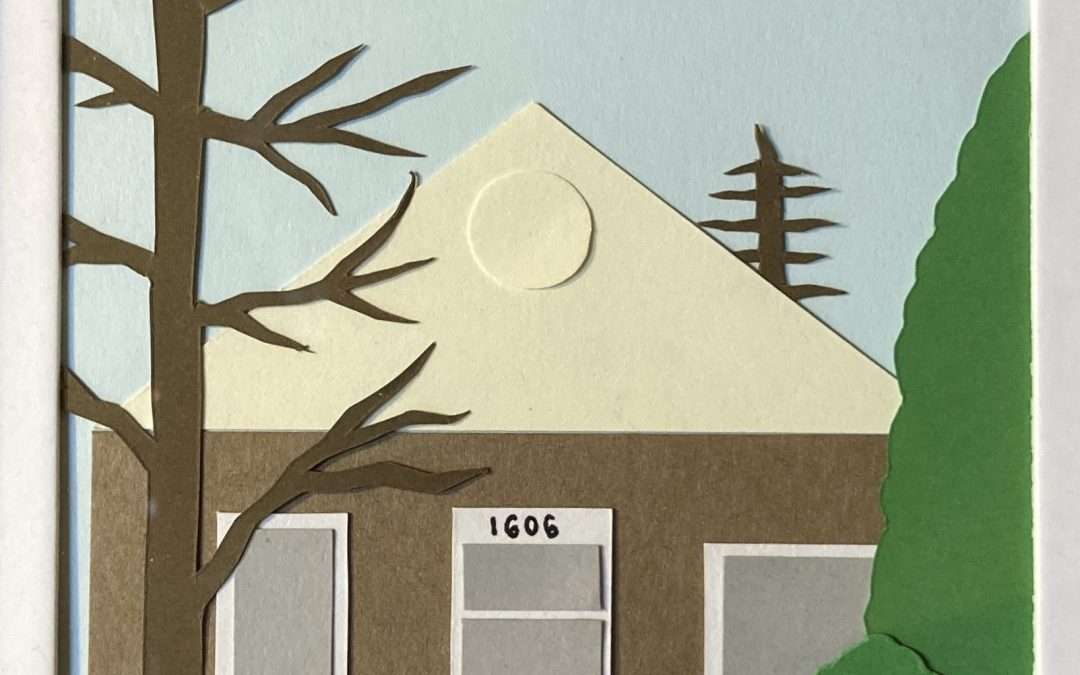 Nonna’s house had a hall closet.  It was located outside of the bathroom and across from my bedroom.  The hallway was so small that if the folding stairs to the attic were down, they ended exactly at the entrance to the closet, making it impossible to open the door.  This tiny interior space was surprisingly important to life at 1606 North 28th Street. It contained an entire world within that drew me toward it, again and again.

The closet’s contents, from top to bottom, were organized by Nonna with care and precision.  “Everysing has a place, sweeheart,” Nonna would say when putting something away. “And you vill find somesing in its place if you put it zer!”  Nonna’s closet was full of objects in their place.

The center wooden shelves held items typical to many hall closets: carefully folded and stacked linens, towels, and down-filled bedding.  Nonna tucked sachets between them, and sometimes I opened the closet door just to inhale the scented air. It smelled like warm fabric and dried lilac.  Just like Nonna.

Nonna’s linen was European in style and unlike any I encountered outside of her home.  She used large, white, unfitted sheets to make the beds, and immense square cases for the oversized down pillows that we slept on and for the down comforters, which she called plumeaux, that we slept under, even during the summer. These cases closed with little white buttons that sometimes pressed against my cheek as I slept.  In the morning, when I looked at myself in the mirror, I could see the circular impression left behind.

Each set of linen was hand-embroidered by Nonna with either her initials or those of my brother and me, intertwined around a large capital K.  The linens were shiny and butter-soft with wear, and after Nonna’s death I used them until they were no longer able to be used.  All that remains from Nonna’s bedding is an irregular-sized plumeau, green silk on one side, red silk on the other, the down-filled pockets now covered by an Ikea white cotton duvet case. When I snuggle under its weight for an afternoon nap, I can smell the last remnants of Nonna and her house.

I was lured to Nonna’s closet by more than its comforting smell. Hanging from a nail near the top of the inner door frame, just within my child’s grasp, was an old plastic toiletry bag filled with candy – endlessly-replaced packages of Juicy Fruit and Doublemint gum and cellophane-wrapped boxes of Pall Mall candy cigarettes waiting to be opened and “smoked.” Nonna let Ned and I have access to the bag without prohibition, and we spent our childhood rotting our teeth. I had to stretch my right arm high above my head to get into the bag, and for years I had a scratchy, red mark on my inner wrist from where the hard plastic of the handle grated against my flesh as I dug inside for the sweets.

On the lowest shelf of the closet, Nonna kept extra batteries and light bulbs in metal boxes and wide rolls of sticky red adhesive tape that she used for labeling everything from the spines of stamp books to the undercarriages of Ned’s matchbox cars. Next to the boxes were three hot water bottles.  Before bedtime, Nonna filled each one of their terracotta-colored, rubbery bodies with scalding water from the bathtub tap, before carefully screwing them shut with a ringed black stopper.  I loved the ritual of climbing into my cold bed, sliding between the silky sheets, and feeling the jiggly presence of the hot bottle beneath my feet.

Below the shelves, on the closet’s carpeted floor, Nonna stored one of her prized possessions:  a blue electric footbath, a luxurious present from my father.  She called it a “foos badi-badi,” and it came out every weekend.  It was eight or nine inches deep, with ridges inside along the bottom in the shape of a pair of feet.  A long electric cord coiled under the molded plastic, and Nonna uncoiled it and filled the footbath with warm water at the kitchen sink before carrying it carefully into the living room.  Ned and I took turns using it, each of us sitting in one of the two armchairs in the living area, our feet and ankles immersed in the water.  The plugged-in bath would quiver and vibrate, our feet slowly puckering and pruning in the warmth as we sat like eighty-year-olds watching “Mannix” and “Kojak.” After the water cooled, Nonna would get on her knees and pat our feet dry with fluffy towels, saying, “Ah, so gut! So gut to soak!”

On the highest shelf of the closet, beyond the reach of my young self, Nonna kept a black overnight bag. Nonna called it her “hospital bag,” and inside was a beautiful silk bathrobe, hand-crocheted slippers, and a cotton nightgown decorated with lace at the neck and the cuffs.  Nonna took the bag down sometimes so I could look inside and run my hands over the softness of the fabrics and finger the ropey firmness of the crocheted slippers. When I asked her once why she never wore those things, she explained they were for one purpose only: an emergency trip to the hospital.

As a girl, I didn’t question the presence of the packed bag.  It was a fixture in the closet, and I would have missed it if it weren’t there.  But as an adult, I have wondered why Nonna  had it.  Did she want to look her best, even in the hospital?  Did she want her son, the doctor, to be proud of her appearance, even as a patient? I have also wondered if the bag were packed for a very different reason. Years after Nonna died, I learned that it was typical for Holocaust survivors to keep a getaway bag packed and ready to go, even decades after their escape from the war and the terrors of the time.  Nonna often expressed fears to me that her life – our lives – could change in an instant.  Maybe she kept the packed bag to cope with those fears, to be prepared to flee at any moment.  Or perhaps she believed, irrationally, that if the bag were packed and ready, she would never need to use it, even for a trip to the hospital.

By the time the hospital bag was taken down from the closet, I had almost forgotten it existed.  I was in my early teens and struggling through the awkward years of junior high school. It was a fall weekend day, and I had ridden my bicycle to Nonna’s house, a five-mile trip that took me from the winding hills of Billings Park and the bay near my house, to the straight flat expanse of North 28th Street that led to Nonna’s house.  The visit itself was unremarkable, and when I decided to head home, I didn’t yet feel the tug that would bring me back.

I waved goodbye to Nonna, straddled my bike, and headed west on 28th Street.  When I crossed Tower Avenue and entered the stretch of open road that led to two separate sets of massive railroad crossings, I became aware of a strong headwind pushing against me.  Within minutes, my eyes were stinging, and my legs were trembling from the exertion of pedaling into the force of the wind.  I began to think of giving up and turning around, and as I debated with myself about what to do, a familiar feeling of defeat coursed through me. I was embarrassed by my lack of physical prowess, even when no one was around to witness it.  “Come on!” I told myself. “Don’t be so weak!”

I pedaled up and over the first set of tracks.  But before I reached the second, I began to lose my nerve.  And I felt something alien in my body.  It was a sensation that I couldn’t name but that made me feel frightened.  I now know it was a cold, creeping, blood-draining sense of dread.

I decided to turn my bike around and ride back to Nonna.  I thought she would be surprised to see me, but when I knocked, she didn’t answer.  The heavy wooden door was unlocked and gave easily when I pushed it open.  And there, to my right, was Nonna, collapsed in one of the armchairs, her hands gripping the ends of the carved wooden armrests.  Her legs were out in front of her, and I could see the toes of her black, old-fashioned laced shoes pointing toward the ceiling. She looked at me and tried to say “sweeheart,” but her voice was strange and wheezy, and I could hear burbling sounds coming from her chest.

It turned out Nonna was experiencing congestive heart failure.  She spent three days in the hospital before she was stable and ready to come home.  When I went to visit her, she was in bed, sitting up, wearing her beautiful, just-for-this-occasion, grey silk bathrobe.

Katharine Krahl is a retired history teacher, working on a memoir about her grandmother.  She is indebted to and inspired by her extraordinary teacher and classmates at HVWC!