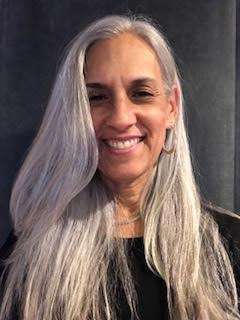 Once Giselle had a chance to reflect on this moment, she realized that seventh period prep wasn’t an ideal time to see something upsetting, as she had two more classes to teach afterwards. When she’d spotted her retired ex-husband in his Pepto-pink swimming trunks and snorkeler’s mask floating ass-up and holding hands in the Maui surf with someone in a very small bikini, she’d lost her breath. It can’t be him, she reasoned. But she’d special-ordered those pink whale-print trunks for him when his interest in the sea was piquing, when he first said he wanted to take her to Hawaii. And there was the half dollar-size mole on his right shoulder, unmistakable in Maui’s morning light. That was him, all right. When the bell rang for the start of the next period, Giselle realized that her seventh graders had already entered the room, had already found her snatching her reading glasses off her face and putting them back on, squinting at the classroom desktop. Her face was only about an inch or two from the screen, so when the usually sad Seb Fisher smirked and asked his classmates, “Is Mrs. Mooring kissing the computer?” her face flushed with shame. The kissy-kissy noises and giggles of the other students snapped her face towards them, and she instinctively patted her chest, adjusted her turtleneck, and asked them to take their seats. “I guess you caught me whale watching,” she said dimly, her eyes still pulled toward the light of the computer. At the 2:53 dismissal, after her students had tested her patience for two straight periods — broken pencils, torn Scantrons, goopy noses, bubble gum snaps (forbidden!) — she ran into a stall in the women’s faculty bathroom and bawled until her eyelids felt like paper. When she finally came out and stood facing the mirror, she could barely look at the wreck who stared back. What was she doing whale watching during her free?

Pathetic. Whale watching through a computer while Richard was in Maui with some bikini-clad bimbo on what should have been their trip? Pa-the-tic.

Cutting off Driver’s Ed. students crawling nervously out of the high school’s adjacent lot, flying past the school’s youth officer who sat in his patrol car positioned so he could see everyone coming into and going out of the neighboring campuses, Giselle drove the fourteen miles to her house at top speed. She opened the door, let the cat out, threw her tote on the counter, kicked off her flats, sunk her teeth into a Granny Smith and then chucked it into the trash, set up her laptop, adjusted her turtleneck, loosened her belt, and turned on the livestream. The whales were active — lots of splashes — but Richard and his young companion were absent from view. For the next seven hours, the screen showed no signs of them.

Giselle’s dreams were often obvious manifestations of her worries: ninety-two unruly middle schoolers packed into a classroom with twenty-five desks, Richard’s mother’s face in the mirror instead of her own, four flat tires in the middle lane of the George Washington Bridge. That night, her nightmares had her desperately flailing, trying to stay afloat in the middle of the ocean, surrounded by whales who threatened to swat her under forever. She woke convinced she was broken and drowning.

Karen Zlotnick teaches high school English, and when she’s not in the classroom, she writes both fiction and non-fiction. “Maui” is part of Secondary, a collection of linked short stories set in a fictional Hudson Valley school district. Karen recently published her first story in The Avalon Literary Review. She lives in northern Westchester County with her husband and their Newfoundland dog.